PC-based IT systems used in the television production and playout chain have a reputation for being low cost. At the same time there is a concern that they may also be low performance. However, in recent years they have been applied as the technology base of playout and titling systems for thousands of new SD channels, so the performance must also be, at the very least, acceptable. Now there is rapid expansion in HD broadcasting. How can PC-based playout rise to this challenge and fit in with both today’s requirements and allow for future needs? 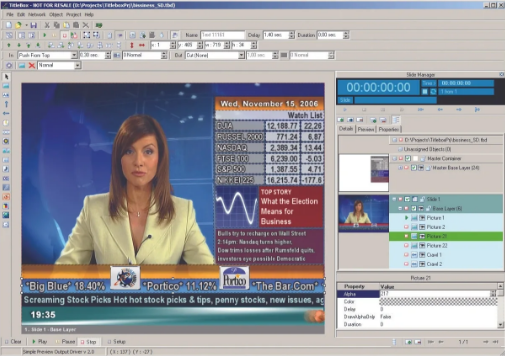 In some areas the move from SD to HD places little or no extra demands on PC-based playout systems while other parts are required to raise their performance to far above SD standards. If the same MPEG-2 compression scheme that predominates in SD transmission were used, the fivefold increase in picture size of 1080x1920 HD over 576x720 SD video would require an equal increase in the transmitted video data. However, the arrival and easy availability of new technology in the form of the far more efficient MPEG-4 H.264/ AVC compression system (with broadly similar results using Windows Media 9/VC-1) has at least halved the data requirement. This reduces the data-rate demand on the HD playout device to about only twice that of SD compressed with MPEG-2.

Not all areas of the SD-to-HD switch are so easy to handle. While newer compression technology has helped the playout area, some others must handle the baseband video, and so work with the 1.5Gb/s data rate of the HD-SDI signal. For example ingest may be required to accept HD-SDI as opposed to the 270Mb/s of (SD) SDI.

Baseband must also be handled where information is changed in the video – such as the addition of a logo graphics or text. Such graphics generators have to work with roughly 2 million pixels in HD, as opposed to well below 0.5 million pixels in SD, and need to run in real time – at 25 or 30 frames per second. Such processing power tends to add cost, as it requires much faster graphics processing and memory. These two requirements render most of the current SD PC-based servers or workstations useless for HD titling.

In other areas that do not handle the video and audio signals, such as media asset management, playlist creation and editing, and subtitle generation the data rates and general needs are very much the same as for SD. At least the changes can be accommodated in software without the need for more powerful hardware capabilities.

Although the pictures are much bigger and sharper HD commercial revenues are not much bigger than those of SD. From an advertiser's point of view the paramount concern is telemetrics – the size and type of the audience watching commercial spots, not the image resolution. As a result broadcasters are looking into ways to optimise their playout solution by:

• Bundling HD and SD channels in packages to attract more commercial revenues and distributing the increased cost over all channels.

Given that the operational requirements of HD are broadly the same as those for SD, HD needs could be met by upgrading the PC systems. As indicated above, the areas not handling the media signals may, at most, need new software. Those that do handle the signals need more attention.

Graphics and text needed for subtitling operations have to be live and have always been way beyond the power of the CPU and attendant RAM – even when working in SD. The solution has always been the use of suitable graphics chips or cards. While television has been revving up for HD, the development of graphics cards has been moving fast. The increase in their available power far outstrips the extra demands of HD graphics, so here a card swap may fulfil the requirements.

The Ingest PC needs a new input card to accept HD-SDI and encode the video and audio using MPEG-4 or the like. If this is performed live then the disc system only needs to hold compressed data and be able to record and play this in real time.  If compression coding is non-realtime, then this imposes much higher requirements to store the input data live.

With the current MPEG4 AVC an HD channel running the 1080/50i format may run at about 8 Mb/s, depending on the material and the target quality of service offered to viewers. This depends on content with sports generally requiring more. As with SD, in order to maintain a good standard of final output the playback system needs to run a mezzanine compression of the same type as the transmission but at about twice or triple the bit rate. So, in this example, indicates a data rate of about 8-15 Mb/s against around 3-5 Mb/s currently used for SD transmission. This is to allow for the decode/recode losses during the graphics or logo insertion stages while still delivering suitably high quality for transmission. Such data rates should be within the capabilities of the PCs and could be carried on low cost IT infrastructure such Ethernet.

The above outlines a change from SD to HD playout and titling as an upgrade rather than involving a wholesale purchase of new equipment. While it is true that some of the plug-in cards may not be cheap, the overall installation, involving little in the way of new boxes and infrastructure, should be at a low cost. In many cases all new equipment will be supplied but the costs should be low and the performance at least as good as the SD equivalent.

For better or for worse SD content and TV sets will be around for some years yet as the period of ‘HD transition’ progresses. Putting aside the resolution, this produces a mix of programme image formats and of screen formats between 4:3 and 16:9 aspect ratio. Accommodating both the legacy and new HD formats can lead to compromises.

There are three established approaches to convert 4:3 content for presentation on HD 16:9 screens: upscaling 4:3 SD, zooming to fill the 16:9 field or converting to the 14:9 compromise conversion. These are all compromises showing either black edges on the screen or losing edges of the pictures.

During the HD transition period many broadcasters are obliged by law, or have chosen, to provide simulcasting for their audience – simultaneous broadcasting of the same channel both in HD and SD. The simplest approach is to downscale the HD channel and run it as SD, but this has its compromises:

• Aspect ratio conversion (ARC), to make 16:9 images fit a 4:3 SD frame showing the whole frame as letterbox, or filling the 4:3 screen and loosing the edges. For simplicity the latter could just take a fixed centre section. Pre-recorded material could be panned and scanned to include more of the action but at the cost of time and effort.

• Titles and captions designed for HD may not work for SD as they become too small or are cut off in the ARC process – or both!

Given the above, this approach cannot offer the best service for both SD and HD – one or other will be compromised. At a time when you want to encourage viewers to invest in HD, it is important that they should only see the best pictures.

A more sophisticated approach is to use an ‘intelligent’ simulcasting system that runs two independent channels, SD and HD. Both are based on the same playout schedule and so keep in step, but using different content which has been properly pre-processed to suit each format. Such a system would also provide the channel branding correctly. That means SD titling and logos are designed and presented so that they are readable and look good at SD and on a 4:3 screen, while the HD titling and logos will be set to fit with 16:9 images, and displayed at a suitable size for the target displays. Although this adds to the complexity of the playout and titling, it is much better in image quality, graphics and text layout, readability and consistency.

PC-based IT solutions have already been supplied to many start-up TV channels to provide lower cost playout of SDTV. The low-cost aspect may convey the expectation that this would not easily transfer to HD. That assumption has already been proved incorrect with the HD solutions already up and running. A recent installation is Brava HDTV in Holland. Their playout system includes HD CaptureBox, HD AirBox and HD SubtitleBox. Broadcasting started on cable and soon and goes on satellite this summer.

Much of the HD playout system is relatively unaffected by the SD/HD change while only the areas handling the baseband HD signal and new compression codecs need to be upgraded by PC card changes as well as accompanying software. Thus the majority of the system’s structure is unchanged.

The low cost PC-based IT solution emerges as being adaptable – perhaps more than alternative solutions. It can actually be upgraded to HD. This is in a large part due to being able to tap the continuing high speed of development in the wider IT business while specialist companies give vital support for handling the video signals. This low cost can help shape better broadcasting during the HD Transition by encouraging broadcasters to avoid many of the compromises of simulcasting from just an HD source and opt for an intelligent SD and HD simulcasting solution.