DVB and ATSC broadcasting has been in operation for approaching nine years – long enough for the pattern of workflow from programme tapes to the transmitter to be considered well established. PlayBox is younger than DVB and ATSC broadcasting but is already an established supplier of affordable 21st Century DVB solutions for broadcasters. Its latest developments extend its open-standards design approach to create a new playout path that avoids the usual costly equipment associated with creating the DVB Transport Streams (TS). With nearly 3,000 channels now playing out from PlayBox systems this new move is aimed at addressing the needs of satellite operators’ uplink centres and the NVoD market.

Traditionally, television broadcast playout has been based on baseband connections – such as SDI. This offers great flexibility for adding material, such as graphics, as well as cutting in commercials, promotions or other local content. PlayBox has always offered a comprehensive range of traditional video connections but has now supplemented these with IP and ASI streaming. This supports both MPEG-2 TS (Transport Stream) and PS (Program Stream) so, for example, a single PlayBox complete with the ASI and IP interface, known as AirBox Streamer, can stream an individual channel in the same way as this would happen on baseband SDI. Logos and additional Graphics may be added via TitleBox software and multilingual subtitles may be added via an integrated DVB SubtitlePlus server. Typical applications of the PlayBox DVB series include multi-channel 24/7 DVB/ATSC recording, streaming, time shift and commercial insertion. 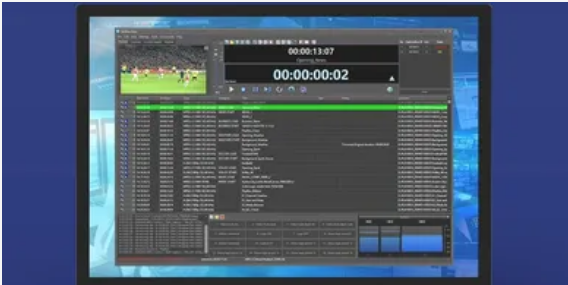 Rather than using a single box in isolation users require whole solutions. The IP Streaming option and the ASI interface card, which plugs into existing equipment, and its associated software, is available across the range of appropriate PlayBox equipment that forms the PlayBox DVB series. Besides AirBox Streamer, CaptureBox Streamer is designed for ASI/IP ingest and a multiple input DVB Muxer for combining the multiple AirBox Streamer outputs into a single ASI-MPTS (Multiple Program Transport Stream). These, and other system components, can work together to fulfil any number of specific playout service requirements.

Satellite uplink centres tend to work with DVB-ASI and, if only programme delay of a TS is required, then a single AirBox/CaptureBox Streamer combo could handle this.

It is often the case that local material needs to be added to a downlinked satellite feed. This may include items such as channel IDs, promotions and commercials. In this case a CaptureBox Streamer can ingest the main programme as live MPEG-2 stream from a downlink. The local interstitial content is inserted by the designated AirBox Streamer by IP or ASI. The AirBox can run a playlist and so cut the main programme and interstitials together live, to create a continuous IP or ASI stream to the Muxer.

Note that, so far, decoding the MPEG-2 contained in the ASI has been avoided so maintaining the maximum output quality. However, if graphics need to be added then this can be achieved in two ways – traditional (using baseband) or contemporary (using an integrated re-encoding technique).

Near Video on Demand playout is possible with even greater simplification. In the NVoD model is it assumed that programme material is not changing very often: unlike the constant throughput in the standard multichannel broadcast playout model. It is also supposed that there are no live changes to be made to the material: what is stored is delivered without adding graphics. Alternatively graphics were added at the ingest stage.

The input side of this operation is far less active than for broadcast playout; also the operation does not have to run in real time. This means equipment and running costs for handling a live video input can be avoided if material is supplied directly to an AirBox Streamer as MPEG-2 compressed video over IP. If baseband video must be used then a CaputreBox Streamer can accept and compress it, passing it on via IP to the AirBox Streamer.

AirBox Streamer can support up to 256 IP output streams that can be fed directly to the DVB Muxer to create the ASI-MPTS. Thus just two units, the AirBox Streamer and DVB Muxer can provide a compact and efficient NVoD service, without the need for costly coders and the need to handle video.

Another costly element of the traditional playout model may appear to be missing. It is not. Dedicated automation systems were a necessity when video equipment was built as individual islands and a workable operational system had to include some way of making them work together. That situation started to change when large volumes of video could be recorded to hard disks on a standard platforms, or similar equipment, which contained many of the capabilities that used to be spread over several separate boxes. AirBox effectively includes all the automation that is needed to run a TV channel. Working on a larger scale, PlayBox has introduced TrafficBox to take care of front-end business management and back-end MCR and automation. Also SafeBox can provide large-scale storage and media management. With up to 20 TB of RAID5-protected storage it ensures that AirBoxes are loaded with the material required for their upcoming commitments.

Playout needed to adapt to the new world. The initial challenge was to provide efficient playout for the many broadcast channels that have emerged with the arrival of digital television. The addition of ASI and IP connections for key PlayBox applications means that they can directly address the particular needs of telecoms organisations. They can now offer more efficient high quality and cost-effective resending and repackaging of programmes for their clients.